Everyone is rightly excited about the wall of amazing tech-enabled startups being born in Europe and Israel, disrupting massive industries including media, marketing, fashion, retail, travel, finance and transportation. However, there's one incredibly disruptive startup based in London that is going after one of the biggest markets of all, and is so opaque it is largely unknown in the world of business -- and, much to my chagrin, it's also impossible to invest in.

It's not a private company, it wasn't started by "conventional" tech entrepreneurs and the market (though huge) is decidedly unsexy.

Its name is the Government Digital Service (GDS) and it is disrupting the British public sector in an energetic, creative and effective way. In less than two years GDS has hired over 200 staff (including some of the UK's top digital talent), shipped an award-winning service, and begun the long and arduous journey of completely revolutionising the way that 62 million citizens interact with more than 700 services from 24 government departments and their 331 agencies.

It's a strange world we live in when the government is pioneering the way that large complex corporations reinvent themselves to not just massively reduce cost and complexity, but to deliver better and more responsive services to their customers and suppliers.

As former government advisor Rohan Silva has recently written, the UK was spending on IT "like a drunken sailor". If you were one of the world's largest IT suppliers, there was a £16bn annual IT budget to sink your teeth into. But the party is over (although it may take some time to end) and people like Liam Maxwell, Mike Bracken and their teams are slashing the budget and applying the principles of openness to radically reduce cost, increase transparency and improve services.

Although we can't invest directly in this £16bn disruption, as citizens we are and should be grateful shareholders. While significant groundwork was laid in the last government by people like Tom Steinberg, the drive and air cover which Francis Maude and Martha Lane Fox have provided GDS should be a model for FTSE boards. These boards are floundering as they peer into the abyss of an economy where the internet now accounts for more than 10% of GDP while technology, social media and the internet are reshaping their industries. 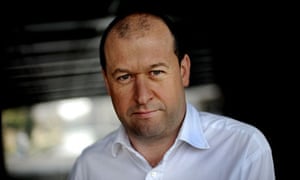 Head of GDS Mike Bracken is serious about changing the way government does business with SME tech firms. Photograph: Sarah Lee for the Guardian

It's shameful that with over £1.7tn in market cap and over 6 million employees, the FTSE 100 are still grappling at board and executive levels to understand, never mind take advantage of, savings and opportunities available in a world where 3 billion people are online.

Chief technology officers are not necessarily the answer, as many have grown up in the same world as old-school government IT -- outsourcing, closed systems and vendor lock-in. The internet is the answer, or at least the spirit of it, and what is so impressive about GDS and the people behind it is that they, in practice and philosophically, "get" the internet. Not in the way that TechCrunch or Mashable do -- in sound bites -- but in the way that Dropbox, Etsy, Spotify and SoundCloud get it: profoundly.

So what is it that GDS knows that every chairman and chief executive of a FTSE100 should know? Open innovation.

• Leads to radical and remarkable transparency like the amazing Transactions Explorer designed by Richard Sargeant and his team. I challenge any FTSE100 to deliver the same by December 2014, or even start to show basic public performance data -- if not to the internet, at least to their shareholders and analysts.

• Leads to incredible and unpredictable innovation where public data is shared and brought together in new ways. In fact, the Data.gov.uk project is one of the world's largest data sources of public data with over 9,000 data sets for anyone to use.

• Deliver interoperability across devices and suppliers

• Provide freedom from lock-in to any one vendor

• Enable innovation from a level playing field of many companies, including cutting-edge startups

I know Liam Maxwell, Mike Bracken, and the teams they are assembling, could walk into senior roles to provide a much needed shake-up to almost any FTSE 100 (given how few are already on this journey) and make a huge difference. For the sake of our collective national investment, I hope they stay put for some time and keep pushing the boundaries on what technology can do to reshape the costs and performance of government in our lives.

• Saul Klein (@cape) is a partner at Index Ventures. Most recently he was the co-founder of Seedcamp, as well as co-founder and original chief executive of Lovefilm International. He was also part of the original executive team at Skype